Status of the Empire: Forging ahead on Chapter 25

Abandon hope all ye who enter here...When writing becomes a way of life, there is no hope, you just have to keep writing and hope the pain goes away...

Working on Chapter 25 and really enjoying it. Tucker and Dain, the two new rebels characters, are shaping up nicely.

Here's a snippet from a scene I'm working on.

Setting: Tucker, the rebel leader, and Dain, his second-in-command, are about to question the CEO of a weapons cartel they have just kidnapped.

Tucker dismissed the rebels guarding Don-Rio and readied for the unpleasant task ahead. His gaze fell on the slightly crooked bronze sign reading Storage Room #4. The imperfection gave it a natural, artistic look, unlike the obsession with perfectly aligned and symmetrical lines of their antiseptic society.  Beside him was the rock-like presence of Dain, and the familiar sound of a well-used pistol sliding smoothly from his holster.

Sometimes it calmed him to watch the precise, well-practiced movements of his right-hand man. They were lucky to have him on their side. The ease and skill with which this man killed made him a deadly enemy and for some reason, even though he could, and should, lead a rebel group of his own, he stayed with Tucker.

"Are you ready?" he asked, even though he knew the answer. It made him feel better to hear a response.

In height, they were about the same but the erect military posture made Dain seem taller. His steady brown eyes met Tucker's eyes. His words were rarely adorned but always direct. "Are you?"

Tucker let out a long sigh. "I'll do what I need to. You know that."

"Sometimes, I wonder if you do." Dain dropped the gun back into the holster, leaving the catch unsnapped.

"Let's get this over with." Tucker slapped his hand on the palm print reader and the door slid open.

The room was oppressively grey, like a sky just before it was ready to pour. The single captive occupant faced the door, his arms crossed over his elegant black suit; every inch a man who wrote his own destiny.

The man stared at him with impassive eyes. Waiting.

"You know what I want," said Tucker, folding his arms in a mirror image of his opponent.

"You know my answer."

Dain moved with panther-like grace, circling Don-Rio with steps that wouldn't bruise a twig. He stopped behind him.

"This doesn't have to be unpleasant," said Tucker. "Give me access to the Tingash facility and I will let you go."

"We're well past unpleasantries and access to that facility is highly classified as you well know." There was the sound of loudly cracking knuckles behind him but no reaction crossed his face, not even a blink.

"Oh, I know," said Tucker. In their smart tuxedos, they were distorted mirror images of each other; one draped with the cloak of  power and privilege and the other possessed a rougher, throw-away magnetism.

"I find it fascinating how a neutral company could work so closely with the Empire," said Tucker.

"Give me the same amount of money and I would gladly work with your rebels."

"You're not a businessman, you're a mercenary," charged Tucker, "But instead of fighting for the highest bidder, you do research for anyone who can pay your exorbitant prices."

"People like us take responsibility for our own lives, We don't push the blame for our own inadequacies on others."

"This is a waste of time," growled Dian. In a blur of motion, an arm wrapped around Don-Rio's neck, jerking his head back, and slamming his body to the deck. The man grunted with the impact and clawed at the vice around his neck.

Tucker loomed over him. "We don't plan to."


The model for Tucker 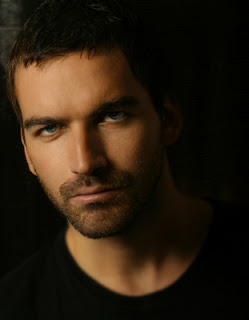 Email ThisBlogThis!Share to TwitterShare to FacebookShare to Pinterest
Labels: scene, status of the empire